Head coach of Asante Kotoko Prosper Ogum says the club will bounce back from their defeat to Legon Cities.

Kotokon were beaten 3-1 by Legon Cities in a Ghana Premier League Week 26 game at the Baba Yara Stadium.

This was the second consecutive defeat the club has suffered after losing to RTU last week.

After the game, Ogum said he expects the club supporters to back them because they can bounce back easily.

“This defeat shouldn’t take away the believe in the heart of the fans. If you look at what the team has done, this defeat shouldn’t wipe away all that. We need the fans the most and they should not lose faith in the team, I will plead with the fans to support and encourage the team. Once they support, this is Kotoko we are talking about and we can easily bounce back”.

The Porcupine Warriors were looking to bounce back to winning ways after losing to RTU last week.

That started on a bad note for them as Jonah Attuquaye was brought down in the penalty box by Kotoko right back Christopher Nettey and that resulted in a penalty.

Michel Otuo stepped forward and scored to make it 1-0 to Legon Cities in the 17th minute.

The second goal followed in the 28th minute when an unmarked Hans Kwofie tapped into an empty net to make it 2-0 to Legon Cities after some poor defending from the Porcupine Warriors.

That yielded quick resulted as Mudasiru headed home from a corner to make it 2-1 before the break.

After the recess, it was Legon Cities that got their two goal lead back.

A long ball from the left saw Jonah Attuqyauye send in a beautiful cross and Hans Kwofie headed home to make it 3-1 in the 47th minute.

Kotoko pushed to get goals but that did not materialize as Legon Cities won 3-1.

This win takes Legon Cities to 8th on the table and Kotoko still lie 1st with Bechem United who they lead eight points set to play tomorrow. 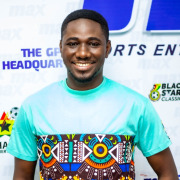