The competition is gathering momentum especially in the Southern Zone where only one point separates Hasaacas Ladies and Berry Ladies. In the Northern Zone Ampem Darkoa Ladies need only one win to wrap things up in the Zone after opening an 11 point gap at the top of the table. Here is what to expect on match day 11 in the Southern Zone.

With just one point adrift the top, Berry Ladies will like to keep their title chasing aspirations intact with victory on Saturday. The team has won all matches in the second round of the league including a comprehensive 4-1 away victory over Immigration Ladies and a solitary win over Soccer Intellectuals at home. Going into the weekend game, Berry whipped tottering Sea Lions 2-0 the Robert Mensah Park in Cape Coast to make it three wins from three matches in the second round of the League. This weekend, they come up against plucky Police Ladies in Madina – where they have won all home matches thus far. Police Ladies have been in fine form in the second half of the league having won 2 games and drawn one. They were the biggest away winners last weekend after annihilating Soccer Intellectuals 4-1 at Ajumako. In the opening fixture of the second round, Police Ladies mauled Thunder Queens 3-1 and secured a vital 2-2 draw with Sea Lions after going down by 2 goals in the first half. They slipped 2-1 at home to Berry when they last met in the first round – with Faustina Akpo and Thelma Baffour scoring while Victoria Teye William fetched the consolation. This weekend’s clash is a fine opportunity for Berry Ladies to make a big statement to their opponents on their title ambitions with the season gradually inching towards a scintillating end.

Lady Strikers return to their home grounds, Robert Mensah Stadium to play rivals, Sea Lions on match day 11 of the Women’s Premier League. Ladystrikers secured the three points against Immigration Ladies – with Gladys Amfobea’s brace and Catherine Arthur’s 15thminute strike giving them the three points. Even though Immigration Ladies took an early lead through Linda Aba Mensah just a minute after kick-off, their lead could not give them the needed victory. Sea Lions have struggled for a larger part of the season sitting in the bottom spot in the League. Gladys Amfobea and Suzzy Dede Teye’s scored to give them a 3-1 over Sea Lions when they clashed in the first round.

A win for Hasaacas Ladies in this weekend’s clash will extend their unbeaten streak to 10 games. Their second round route begun with 5-1 win over Ladystrikers with goals from Doris Boaduwaa, Veronica Appiah and Milot Abena Pokua. The ‘Dooo’ Ladies continued their demolition exercise against Immigration Ladies at Gyendu Park in Sekondi. Again, Doris Boaduwaa, Milot Abena Pokua and Veronica Appiah were on target. Their trip to Tema Community 8 Park on match day 10 saw them beat Thunder Queens 4-0. Doris Boaduwaa, Milot Abena Pokua and Veronica Appiah made the headlines on the day with four brilliant goals. Soccer Intellectuals have been inconsistent in the second round – beat Sea Lions 3:0 but lost two games on the spin against Berry Ladies and Police Ladies. The visit to Sekondi gives them an opportunity to avenge the first round defeat.

The two teams have undoubtedly had a patchy season. Immigration Ladies are languishing in 7th place – bottom of the Southern Zone log with only 5 points from 10 games. Thunder Queens have managed two wins and two draws in the season and sit in 6th place in the league table. Last weekend, both teams suffered home defeats to their respective opponents – Lady Strikers trekked to Accra to stun Immigration 3-2, while league leaders Hasaacas Ladies mauled Thunder Queens 4-0 in Tema. Not much quality has been exhibited by the two clubs throughout the season but either side are hopeful of taking their chances in this clash. A 46th minute strike from Elizabeth Oppong and a goal from Romanatu Tahiru ensured the last meeting between the two sides resulted in a draw. The McDan La Town park is set to witness another battle between these town side on match week 11. 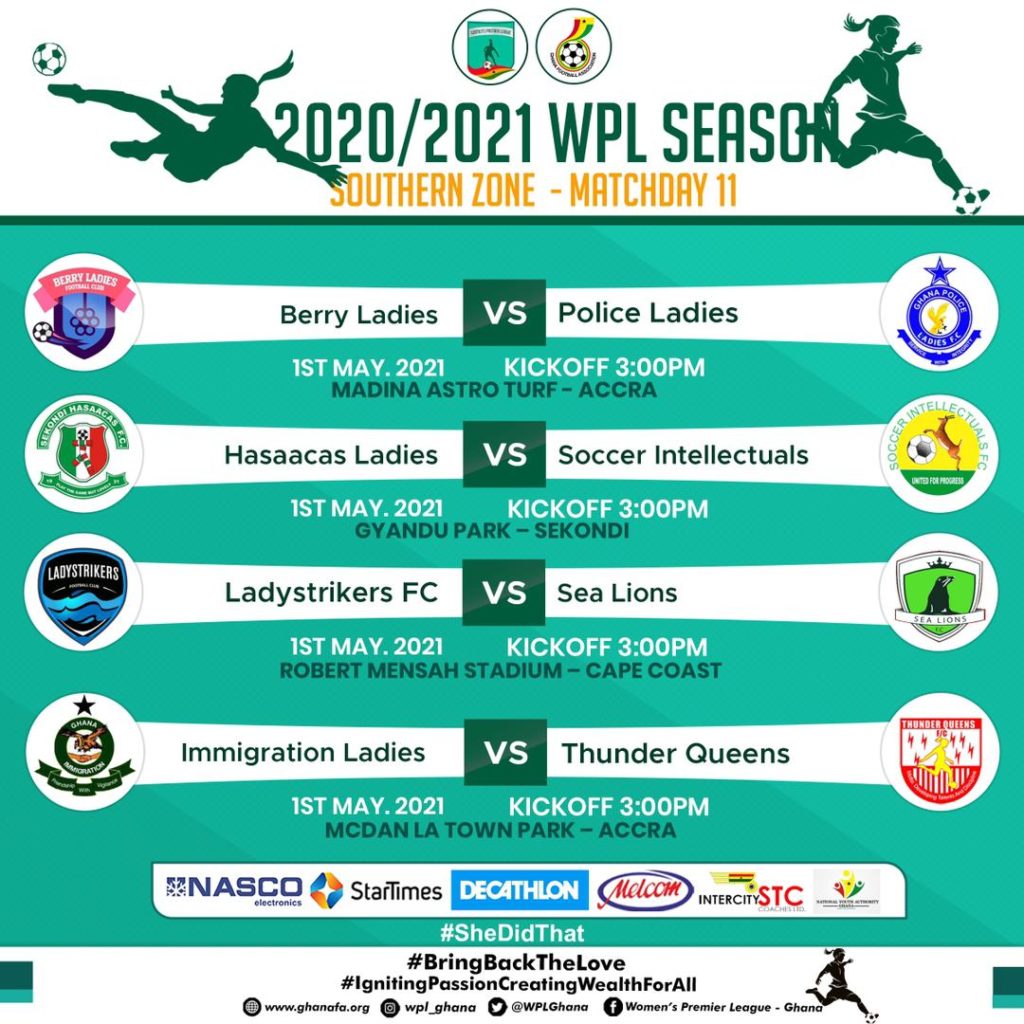